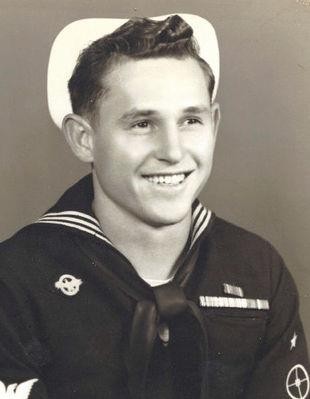 Robert “Bob/Pops” Fellows, a resident of Gonzales, Calif., passed away July 11, 2019 at Eden Valley Care Center in Soledad after a brief illness at the age of 93.

He was born April 27, 1926 in Santa Ana, Calif., to Howard and Susie Fellows and lived in Gonzales for over 85 years. Upon graduation from Gonzales High School, he enlisted in the Navy and served in WWII as a gunner’s mate in the South Pacific.

After the war, he married the love of his life, Verena Studer. At the time of Verena’s passing in 2011, they had been married 64 years.

Bob started his career as a butcher and returned to school attending Hartnell College and UC Berkeley where he obtained his vocational teaching credential in meat cutting. He worked as a meat cutting instructor for over 30 years at the Soledad Correctional Facility until his retirement in 1986.

Up until recently, Bob enjoyed building furniture, wahoo game boards and frames for family and friends. He was an avid San Francisco Giants fan and enjoyed traveling, especially with his wife and playing yogi and wahoo with his grandchildren. In his earlier days, he also enjoyed hunting and golfing.

Robert is preceded in death by his parents, his wife, Verena, his son, Robert and sisters, Joleen Vanoli and Patricia Williamson.

Memorial service in Bob’s honor will be held on Saturday, August 10th, 2019 at 11:00 AM at the Gonzales Community Presbyterian Church, 4th and Day Streets, Gonzales. Reception immediately following at the American Legion Hall, 419 5th Street, Gonzales, CAC. 93926. In lieu of flowers, donations can be made to the Gonzales Community Presbyterian Church, PO Box 715, Gonzales, CA 93926, or VNA/Hospice Foundation.