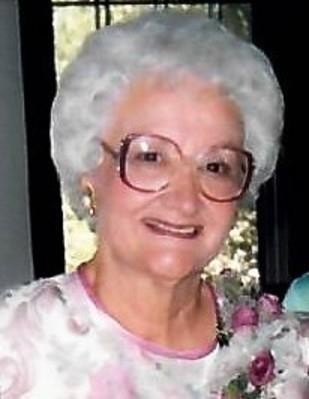 Patricia Virginia Binsacca Terry, family matriarch and member of the Greatest Generation, was welcomed back into the loving arms of her husband and parents on July 18, 2019. She was 95.

Patty was born in Gonzales, CA, the second of four children of Alfred and Tillie Binsacca. In her youth, Patty was a serious student and could often be found in a quiet corner of the house, reading a good book—a hobby she enjoyed well into her 80s. Patty grew up in the Mission District of Soledad, CA, and was valedictorian of her Gonzales High School class of 1941. She had aspirations of following a family tradition of becoming a teacher but accepted the position of bookkeeper at Hamby Lumber Yard in Soledad, shortly after her high school graduation. She held this position for 13 years.

During the World War II years, Patty acted as a civilian airplane spotter and commanded her observation post in the hills west of Soledad. She also helped the war effort by entertaining the troops and folks up and down the Salinas Valley as a member of a little local female singing group, which was made up of close friends and cousins, called the “3 Sharps and a Flat.” Patty couldn’t “carry a tune in a bucket,” so, of course, she was the “Flat.” The group was together for a short time, but the young ladies had so much fun and enjoyed a lifetime of happy memories of bringing a smile to others during a very difficult time in our nation’s history.

It was also during the late 1940s that Patty met the love of her life, Frank Terry. He was the young handsome funeral director of the Terry Mortuary who was new to the area, but he, at the time, was more captivated by her cool coupe car than he was by her; however, that all changed, and they were married in 1951 until Frank’s passing in 1997. The two of them were a team, and they provided much comfort to grieving families during their time of need and afterward. They were dedicated to faithful service, and families who were in mourning became their extended family.

Of all her great traits, the greatest was that of a caring, loving, remarkable mother. Patty’s children, Steven and Jana, were blessed with a mom who loved to cook and bake, go to San Francisco Giants’ baseball games, and was someone who could always be counted on to lend an ear and offer advice when needed. The kids’ friends were lucky, too, because Patty was very involved as a Cub Scout Den Mother, a Room Mother, and an active PTA member. Many a young person benefited from Patty’s kind ways and great baking skills. Remember the Divinity!? She was also a founding member of the Gonzales Chapter of California Young Homemakers.

Patty had hobbies other than reading: She enjoyed gardening and quilting. She was a member of the Hoe and Show Garden Club and took quilting classes at the Salinas Adult School later on in life. She was a member of the Native Daughters of the Golden West and served on the Altar Society of her church, Our Lady of Solitude Catholic Church, and was also a member of its Young Ladies Institute.

In her mid-60s, Patty returned to school and took night classes in Spanish at Hartnell College. She didn’t mind being one of the oldest students in her class and always got a kick out of the teacher fondly calling her Senorita Viejita. One of Patty’s proudest accomplishments was as the self-appointed historian of Fort Romie Salvation Army Colony. Researching information of the community in which she grew up was a labor of love for her, and her work can be found on the Monterey County Historical Society’s website.

Patty’s greatest joy in life was being a mother and grandmother. Her grandson, Steven Terry, Jr., was her shining light, and she was always proud to attend his sporting events, especially basketball games, when he played and later coached. He was her source of pride, namely when he became a high school teacher at Soledad High School.

Visitation will be held this Thursday, July 25, 2019, from 4 p.m. to 6 p.m. at Woodyard Funeral Home in Soledad. Rosary and Mass will be held Friday, July 26, 2019, at 10 a.m. at Our Lady of Solitude Catholic Church in Soledad. Burial will follow at Soledad Community Cemetery. Memorial contributions are suggested to the Monterey County SPCA, Soledad Historical Society or Eden Valley Care Center, where Patty received the best of loving care.

Patty was a brave, non-judgmental, fun-loving, remarkable lady who will be missed every single day.