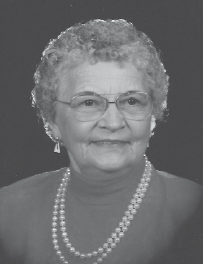 Mildred Caroline Gibbs, a longtime resident of Soledad, Calif., died Thursday, the 4th of April at the age of 97.

Born in 1921 in Coleharbor, N.D., Mildred made her way to Tacoma, Wash., where she worked during World War II as an Aircraft Mechanic at Boeing. In 1943, she married US Navy Boatswain’s Mate 1st Class Gene Gibbs and from there, moved to Paso Robles, Calif.

In 1963 Mildred’s husband, Gene, was working for PG&E as a Foreman and was transferred to Soledad, where the family settled down to build a home for themselves. During her 52 years in the community, Mildred worked various jobs in the community, including crossing guard and potato shed worker and was an active member of the Soledad Methodist Church; a caring Walker Drive neighbor; and a loyal friend who enjoyed calling the small town home.

After Gene’s death in 2015, Mildred moved to Waterford, Mich., where she spent time with her daughters and grandchildren whom she loved to visit.