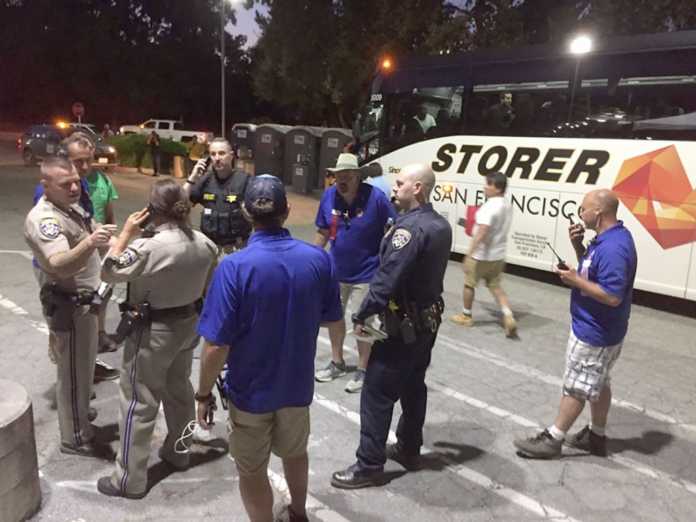 GILROY — A gunman opened fire Sunday evening on the last day of the Gilroy Garlic Festival, killing three people and injuring 12 others at Christmas Hill Park before police shot and killed him.

The July 28 incident was first reported to emergency dispatchers as an active-shooter situation around 5:20 p.m. at the 51-acre community park in Gilroy, located in Santa Clara County about 30 minutes north of Salinas.

According to Gilroy Police Chief Scot Smithee, the gunman — later identified as 19-year-old Santino William Legan — cut through a perimeter fence surrounding the Garlic Festival grounds to enter the crowded event without passing through security checkpoints.

Legan then used “some kind of rifle” to randomly shoot at the victims, Smithee said. Witnesses reported that it appeared to be a type of assault weapon.

Within a minute of the first reports of gunshots, Gilroy officers fatally shot Legan, who died at the scene. His motive for the shooting has not been determined.

As of Monday, police were still looking for a possible second suspect who may have been involved in the shooting.

“The hearts of Gilroy PD and the entire community go out to the victims of today’s shooting at the Garlic Festival,” wrote Gilroy police Sunday night on its Twitter feed.

The three victims who were killed have been identified as 6-year-old Stephen Romero and 13-year-old Keyla Salazar, both of San Jose, and 25-year-old Trevor Irby, of Romulus, N.Y.

“Our hearts go out to the victims, their families and everyone affected by this horrific event,” the statement continued. “We are offering any and all resources available to support our community and law enforcement. We ask for your prayers and understanding at this incredibly difficult time.”

Videos posted to social media by Garlic Festival attendees showed panicked crowds fleeing the area as gunshots rang out in the background. The annual three-day festival attracts about 100,000 people each year, including residents from southern Monterey County.

Sunday night, just hours after news broke of the incident, Greenfield Police Department posted on social media that members of its Police Explorers Program as well as an advisor and one officer were providing volunteer service at the event when the shooting occurred. They were not injured and returned to Greenfield shortly after.

“All of our Explorers and advisors are accounted for and will be returning to Greenfield shortly,” the department wrote on Facebook.

Greenfield officers also responded to a mutual aid request to assist Gilroy police on scene, along with other law enforcement agencies.

Greg Guglielmo, whose family winery in Morgan Hill has supplied wine for the Garlic Festival for the past 40 years, was over by the vendor booths close to Gourmet Alley when he heard the gunshots. He at first thought the loud bangs were firecrackers.

“It’s a very sad situation,” Guglielmo told the Gilroy Dispatch newspaper. “This is such a great festival to be marred by something like this.”

Gilroy police said witnesses to the shooting and those seeking to be reunited with family members can call 408-846-0583. The FBI has also set up a website, fbi.gov/gilroy, for witnesses to provide photos, videos and other information that could help the investigation.

“This is nothing short of horrific,” said Gov. Gavin Newsom in a Twitter post Sunday night. “Tonight, CA stands with the Gilroy community. My office is monitoring the situation closely. Grateful for the law enforcement’s efforts and their continued work as this situation develops.”