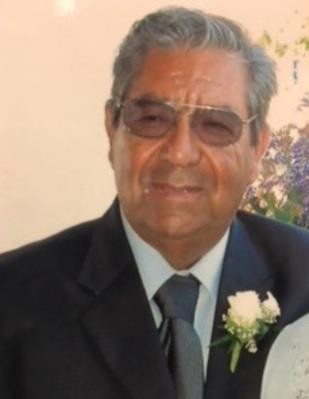 Faustino Montano Mora resident of  Soledad was born on June 14th, 1939 in Tingabato, Michoacan, Mexico. After a long illness, he went home to be with the Lord on March 24, 2018. He was surrounded by his lovingfamily at the time of his passing.

Faustino was the son of Luis and Socorro Mora of Soledad. He came to the Salinas Valley in 1945 and attended elementary schools in Soledad. He attended one year of high school at Gonzales High. Later, he obtained his High School Diploma and with great pride became an U.S. citizen in 1964.

Faustino worked in agriculture his entire life, beginning at the young age of 10, to support his family. At the age of 16, he was the youngest Bracero Lettuce Harvesting Foreman for Hitchcock Packing Co. Later he worked for various agricultural companies such as Let-Us-Pak, Coastal Farms, Green Valley Produce, KGM and Triangle Farms. He regularly migrated to and from the Salinas Valley, Imperial Valley and Arizona. While at Triangle Farms, he was a pioneer by converting a broccoli packing machine to be used for artichoke field packing, the first of its kind in the valley. In 1992, with his friend Bill Tarp, he became a business partner in Triangle Farms. After 68 years in agriculture, Faustino finally retired in 2018.

In 1959, Faustino married the love of his life Beatriz Lucio Vasquez and immediately started a family. Faustino adored his wife, family, and valued his friends. He would do anything to help anyone. He and Beatriz loved to travel. They visited Mexico, Europe, and especially loved traveling to the holy lands. The best memories for he and Beatriz were of family vacations with their grandchildren to Hawaii. He also enjoyed his many weekend trips to ANY casino with Beatriz, family, and friends. He almost never missed a family member’s event and he supported each grandson attending college. Faustino & Beatriz cherished their annual tradition of opening their home during the holidays to unite family and friends.

He taught his children and grandchildren the value of work, the love of family and especially the love of God, through his faith. He was a longtime member of Our Lady of Solitude Catholic Church; where he was committed to serve as an Extraordinary Eucharistic Minister and supported the Youth Ministry.

Funeral Mass: Wednesday, March 28, 2018 at 10 am at Our Lady of Solitude Catholic Church, Soledad