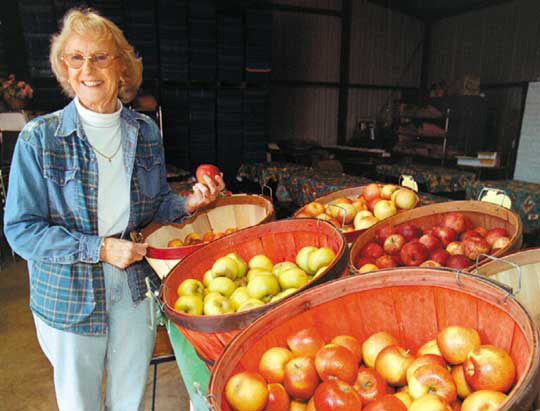 WATSONVILLE — On March 29, the members of Watsonville Rotary and guests gathered at the Watsonville Elks Lodge for the first in a series of special monthly meetings.

The Pioneer Series, according to Speaker Chair John Skinner, will focus on members of the community who have made a significant impact in local agriculture and farming.

“We will be inviting agriculture pioneers of the valley to come tell us their own unique stories,” he said.

A number of other Watsonville clubs and organizations have teamed up with Rotary to bring the series to fruition, including the Pajaro Valley Historical Association and the Santa Cruz County Farm Bureau. Watsonville High’s Video Academy will be on hand each month as well to film each speech.

Brown praised Gizdich for her continued efforts in making Gizdich Ranch a nationally-recognized name and destination.

“Nita has proven that one doesn’t have to have fancy connections or social media accounts to spread the word,” said Brown, explaining how Gizdich always keeps Gizdich Ranch pamphlets in her purse to share with whoever she can.

Gizdich was born and raised in Watsonville after her father immigrated from Croatia.

“My family all got into farming,” she said, and explained how she worked on a farm outside the city until her father was able to buy his own land.

She then married into the Gizdich family right out of high school.

Over the years, Gizdich has created not only a household name brand of pies and other desserts, but also a popular destination to visit at her ranch at 55 Peckham Road.

Brown also acknowledged Gizdich as a very important spokeswoman and advocate for farming. By having a ranch that is open to the public, people can see where their food comes from, and the importance of agriculture, Gizdich said.