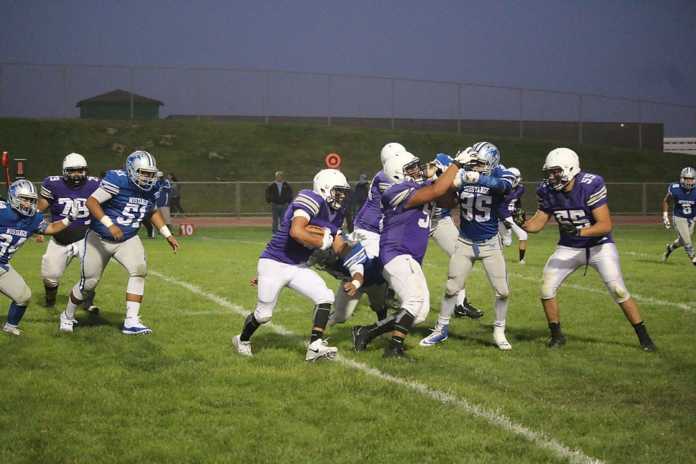 Photo by Michael Ramirez
Chris Gonzales (#3) of Soledad runs for a chunk of yardage on Friday night against King City.

Soledad Aztecs’ new head coach Eric Rodriguez and his staff liked the opportunity to test his team in game situations against familiar foes. This season the Aztecs will play in the Pacific Coast Athletic Leagues Mission Division but will play games against former Mission Trail Athletic League foe Gonzales.

“The jamboree is good so we could look at all our players and their positions and evaluate them,” said Rodriguez. “We cleaned up things on offense and defense to get ready for our opener. Chris Gonzalez at running back and Angel Olivas at wide receiver had some good plays, as did quarterback Gabriel Flores. On defense Miguel Gonzalez and Joseph Calderon made some good plays and so did middle linebacker Miguel Ocampo. We need to have a good week of practice to prepare for Palma who is a disciplined team. We need to clean up a few things and we look forward to the challenge on Friday night.”

The game between the Soledad Aztecs and Palma Chieftains will be played at the Salinas Sports Complex. Soledad JV head coach Joe Escarcega praised his team for their Soledad play in their three periods of play.

“Defensively we were very cohesive, and offensively our passing game was crisp,” said Escarcega. “Our o-line got better as they found their groove throughout the evening. Three gentlemen, Damian Mejia, Kevin Oliver, and Isaiah Cruz proved what our offense can do when they work together. Our next opponent is Palma High School and it will be a good test to see where the program is and what improvements are needed. We’re ready to show what the Soledad High School football program can do.”

Greenfield High’s new head coach Adam Barsenas liked what he saw from the Bruins on the field as they prepare to open the non-league schedule on Friday at home against the Pacific Grove Breakers.

“Highlights from the jamboree and standouts included the play of Sebastian Meza with his four really great receptions that were all contested,” said Barsenas. “He showed us that he is a ball hawk. Daniel Morales, our quarterback ran for a 35-yard touchdown versus King City and Leonardo Ceballos recorded eight tackles a game and finished with 24 tackles in the jamboree. Pacific Grove is a strong team and we are up for the challenge.”

“The kids overall played well at the jamboree,” said Trujillo. “We kept it simple just to get a feel for the kids and what they can do, since for many of our kids it is the first time they are playing football. Standouts for us were Leo Hernandez, Julian Untalon, and Xavier Espinoza.”

The Breakers and host Bruins will face off at 7:30 p.m. at the Greenfield High Stadium.

On Friday, Aug. 31, the Bruins will host the King City Mustangs in a non-league game as King City is now part of the Cypress Division of the PCAL.

The Mustangs will have a week off before the game with Greenfield but were able to work on their skills at the jamboree. Besides Greenfield, King City will also play MTAL foe Gonzales in the Little Big Game on Oct. 12 at War Memorial Stadium.

“The highlight of the jamboree was that we came out healthy,” said King City head coach Mac Villanueva. “Luis Briseno was a standout at receiver and so was Alex Villasenor on the offensive line. One defense Francisco Sandoval and Gabriel Ortiz played well. We have the bye week and our first opponent will be Greenfield in Week 2 over there. We are familiar with each other and we know they have a lot of excitement with their new coach Adam Barsenas.”

Arthur Berlanga returns for his second year at Gonzales High that will be a member of the PCAL’s Santa Lucia Division with Greenfield High. Gonzales will have a league game with Greenfield and non-league games with Soledad and King City. Berlanga liked playing in the jamboree to start the season.

“Everyone got to play, compete, and had an opportunity to contribute to the team,” Berlanga said. “Standouts were Payton Flores, Raul Morales, Nael Vazquez, and Frankie Leon. We will be playing at Morro Bay on Friday and all we know is that they have a full game under their belts and lost a close game to Mission Prep last week.”

“Defense was one of our highlights,” said Alvarado. “We played tough defense against every team. Jose Leon, Ray Torres and our defensive line played great. The defensive backs were playing on an island and did a pretty good job. Joseph Bermudez did very good at running back. We ran the ball well, but we would like to throw as well. We will keep working at on our offensive passing attack.”