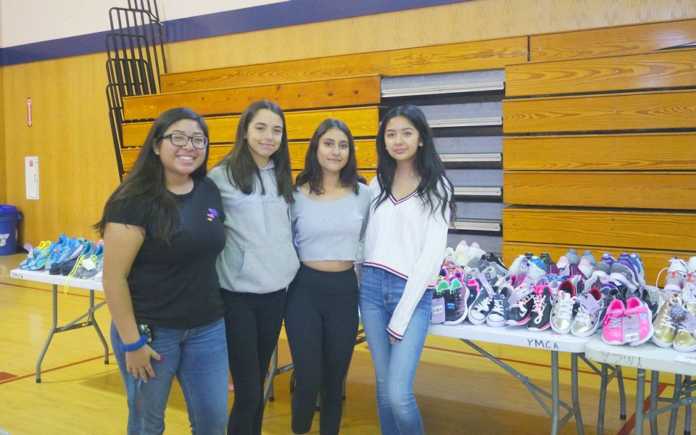 SOLEDAD — Hundreds of Soledad students started the 2019-20 school year this week with a brand new pair of shoes, thanks to a grant from My New Red Shoes.

Soledad Unified School District was awarded the grant from the nonprofit organization this year after District Intervention Coordinator Aidee Aldaco applied for the funding, which provides up to 500 new shoes for underserved student populations, including low-income and migrant students as well as foster and homeless youth. Aldaco said almost 450 students in grades K-12 signed up to receive shoes.

“Our families are working hard to make ends meet, especially with housing prices going up, and there’s not enough rental opportunities right now, especially in Soledad,” Aldaco said when asked about her reasoning behind applying for the grant.

“Because of my role during the year, I really do pay attention when families express their burden. I take in a lot of that information that way when these types of opportunities come up, I can advocate,” Aldaco continued.

Aldaco reached out to Soledad City Council Member Anna Velasquez, who got her in touch with South County YMCA Executive Director Joe Gonzales to secure a location for the shoe distribution. Gonzales opened up the Y’s doors in Soledad for the July 31 event, during which more than 200 youth and their families stopped by the gym to handpick the perfect pair of shoes.

“I and of course the Y wanted to participate in this event because our primary mission is to strengthen community,” Gonzales said. “I believe that being involved personally as well as inviting others to do the same provides the opportunity to experience the joy of ‘giving back’ to those who cannot return the favor. The site of so many teens pitching in and making time to stay all day and volunteer was refreshing and inspiring. There is always an intrinsic value that is the ‘takeaway’ experience from an event such as this one.”

All types of shoes were available, including athletic pairs and sneakers from such name brands as Nike, Adidas, Vans and Converse.

“Everyone was really happy with the selection. It really was like a shoe store,” Aldaco said.

After trying on their new shoes, many of the students did not want to take them off and left the YMCA wearing their latest kicks.

“A lot of the kids were not putting back on the shoes they came in with,” Aldaco said. “We thought that was adorable. They didn’t want to take them off.”

The remaining shoes will be given to the youth who could not attend the distribution at their respective schools. All the new shoes also came with a hand-sewn bag to carry them in from My New Red Shoes.

Aldaco said she was grateful to those who pitched in to help make the distribution event a success, such as Soledad Rotary for hosting the volunteer lunch and California School Employees Association Soledad Chapter 457 and Costco in Salinas for providing monetary donations. Monterey County Office of Education Superintendent Deneen Guss also participated that day.

“It was really nice to have someone like her, who’s so busy, come out and help,” Aldaco said. “She’s going to link My New Red Shoes to our other neighboring districts in South County, so I’m excited about that because I know Greenfield, King City, San Ardo, all those neighboring districts are just in need as we are. It’s not just about Soledad, it’s about South County.”

Aldaco said My New Red Shoes is trying to make a presence in southern Monterey County and she is willing to help other school districts in the area get connected with the San Francisco Bay Area nonprofit. Since 2006, the organization has provided new shoes and clothing to more than 65,000 students living in poverty.