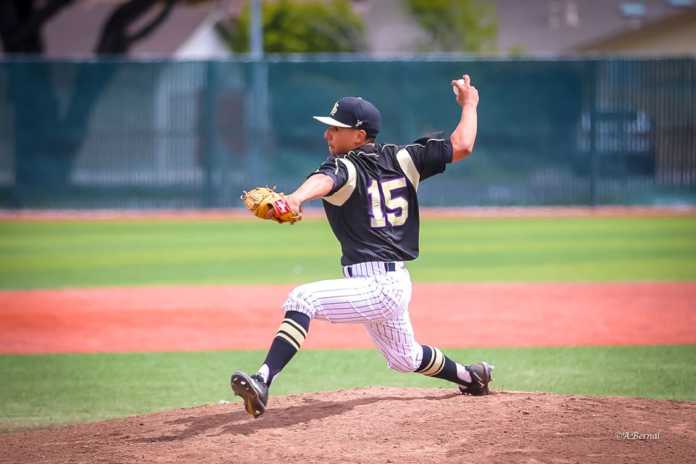 Photos by Arnold Bernal
Above, Anthony Ramirez pitched in Saturday’s CCS quarterfinal contest between the Soledad Aztecs and the Saratoga Falcons. Ramirez was the winning pitcher in the Aztecs 2-1 victory. Below, Andru Holguin threw a shutout in the Soledad Aztecs CCS opening 10-0 win against the Prospect Panthers. Holguin was a the regular season pitching ace on the Aztecs.

SOLEDAD — Victories in the opening round of play and the quarterfinals earned the Soledad Aztec baseball team a spot in today’s Central Coast Section Division II Semifinals against Christopher High School as San Jose’s Municipal Stadium.

Soledad, the No. 1 seed in Division II began the playoffs with a 10-0 home win over Prospect and defeated Saratoga 3-1 on Saturday at Hartnell College in Salinas.

In the shutout victory against the Prospect Panthers, the Aztecs received a strong performance from starting pitcher Andru Holgiun who allowed just two hits and finished with three strikeouts.

In Saturday’s game with Saratoga at Hartnell Soledad trailed by a 1-0 score until the fifth inning when the tied the contest with a basehit by Joel Barroso and fielder’s choice by Aaron Rodriguez that allowed Barroso to score. In the sixth inning the Aztecs took a 2-1 lead with a sacrifice fly by Pajas that scored Robbie Santa Ana who entered the game as a pinch runner. In the seventh inning Soledad loaded the bases and ended the game with double play to earn the semifinals game with Christopher of Gilroy. Anthony Ramirez was the winning pitcher for Soledad and fanned six Falcon batters.

Christopher was seeded No. 12 in Division III and began the playoffs with a win over Hillsdale followed by an 11-2 victory on Saturday against No. 4 seed Gilroy. The Cougars (14-13-1) placed fifth in the Monterey Bay Gavilan Division.

In the other half of the semifinals Archbishop Mitty the No. 3 seed will play #2 seed St. Francis. The Mitty Monarchs beat No. 14 Westmont by a 1-0 eight inning contest, followed by opener and edged No. 6 seed Burlingame on Saturday, 3-2. The Lancers of St. Francis began the playoffs with a 10-0 win over No. 15 seed Half Moon Bay and on Saturday beat No. 7 Pioneer 13-3 in the quarterfinals.