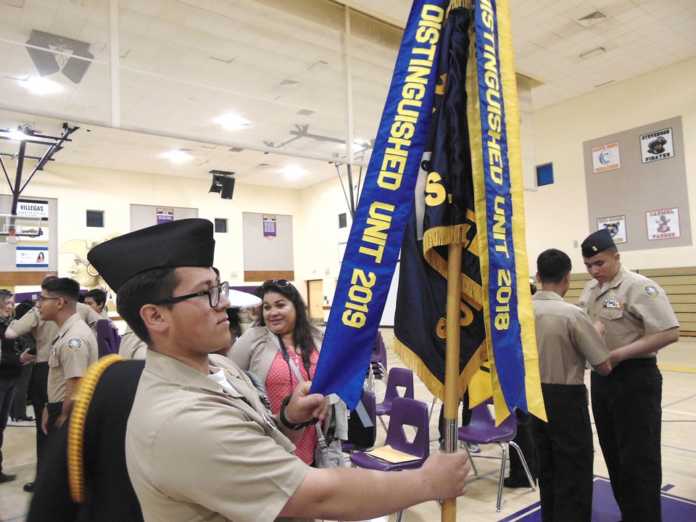 According to Capt. Pete Gomez, to be in the NJROTC program a student has to maintain a C average or better. To be awarded the “Distinguished Unit for Academic Honors,” the cadets have to take exams that the Navy provides.

“We have four books that we go by — naval science, drill books, leadership and a reference manual,” Gomez said.

The program not only focuses on drills, naval science and leadership, but also etiquette; how to dress; how to make a resume; how to take care of finances, such as making a budget; what taxes are and how to establish credit.

“We have yet to graduate a senior with no career pathway,” Gomez added.

The honor was one of two given out to NJROTC programs in Northern California, Soledad and Turlock high schools.

Soledad competes against other NJROTCs throughout the Pacific Northwest.

The program is growing to serve more than 185 students in Soledad and has added an additional instructor this year in Chief Dunn. May 17 served as the changing of the officers and a close out awards night for the entire program, where cadets received pins and medals to wear on their uniforms for various awards they earned throughout the year.

One of the first awards to be presented that evening was the Distinguished Unit for Academic Honors. The group has received this award three times before in 2007, 2008 and 2018.