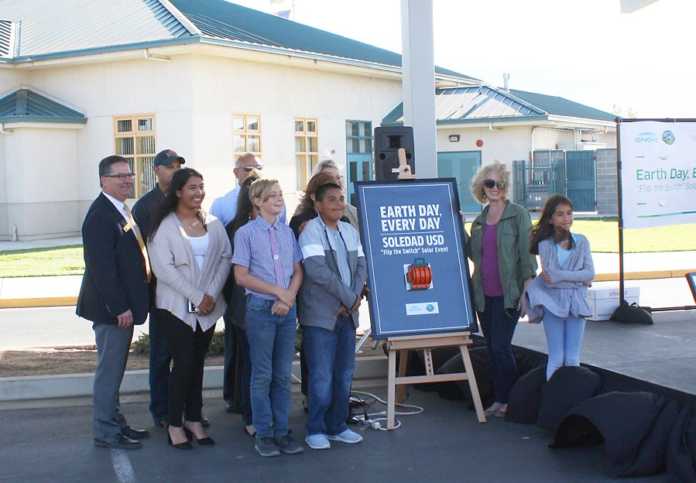 Main Street Middle School will also be part of the solar panel project but has not gone solar yet.

“This partnership will both positively impact our student body and our environment,” said Superintendent Tim Vanoli. “We are a district that is focusing on harvesting the best in class opportunities for our students as well as our community.”

The commemoration of the Districtwide Solar Panel Project had a theme of “Earth Day Every Day” because of the district’s belief in renewable energy in all of the school sites.

According to Vanoli, the Solar Project is expected to save the Soledad Unified School District (SUSD) $10 million in energy costs over the 25-year life of the project.

“Through our first solar site and the completion of our work across the district today, Soledad Unified School District aspires to serve as a model for other schools in the school district seeking a straightforward way to dramatically reduce energy costs and positively impact the environment,” said School Board President Josie Perez-Aguilera.

The district leveraged 0 percent interest rate for funding to start work at Soledad High School and was able to expand the impact to every school site. The second phase of the Solar Project was funded through $3 million in a 0 percent loan from California Energy Commission. The remaining balance was covered with savings as the result of generation of clean solar power.

The district’s solar produces approximately 2 million kilowatt hours of clean energy each year. The energy produced is about the equivalent to powering 143 homes in Soledad every year.

“By using clean energy from the sun the district can now cover 68 percent of our regular electricity needs through solar,” said fifth-grade student Alyssa Perez.

In the first year of the solar panel project the program is anticipating to offset 1,326 metric tons of greenhouse gas emissions in the air. The same as removing 280 cars from the road in one year.

“What Soledad has done is transform one day and turned it into many years of value that are going to go back to the classrooms,” said Courtney Jenkins, vice president of Energy Services, U.S.