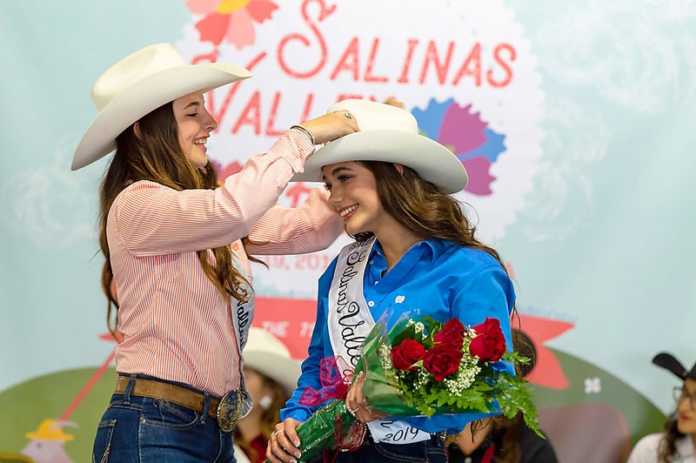 SOUTH COUNTY — Four young women vied for the crown last Saturday in the 2019 Miss Salinas Valley Fair contest, and when the final judge’s sheet was tallied, Rose Escobar of Spreckles came out on top to represent the organization.

Escobar, 16, competed March 15 and 16 alongside August LaMacchia of Lockwood, Nicole Reynolds of Atascadero and Sydney Gray of Salinas. Each of the four contestants were judged on personality, scholastic ability, poise and appearance and horsemanship during the two-day competition.

“I am looking forward to working with Rose to promote our 75th Salinas Valley Fair this spring,” said Darla Mantel, competition coordinator of the 2019 contest. “She is a skilled horsewoman and poised speaker capable of delivering an engaging invitation to inspire attendance to our Fair.”

Escobar, daughter of Gary and Cheri Escobar, is a junior with the Monterey County Home Charter School. One of her dreams is to run for Miss California Rodeo Salinas and have the opportunity to represent the Salinas Valley western way of life.

She has participated in the Pageant of Flags at the 2018 California Rodeo and also rode in the event’s grand entry parade in 2017. Her future plans are to study equine dentistry and one day to open her own equine training and rehabilitation facility.

Escobar was crowned March 16 following a barbecue lunch, hosted by the Salinas Valley Fair Board, at the fairgrounds’ Orradre Building in King City. Dominque Mantel, a former Miss Salinas Valley Fair and 2016 Miss Rodeo Glennville, was emcee for the event.

Also on hand was Miss Salinas Valley Fair 2018 Teagan Soares, who assisted with distribution of prizes and crowned this year’s winner. Soares is currently attending Feather River College in Quincy, Calif., where she studies agriculture and participates on the College Rodeo team.

She will also reign over the 75th annual Salinas Valley Fair in King City set for May 16-19 and will have the opportunity to represent the fair in the Miss California Rodeo contest in Salinas this summer.