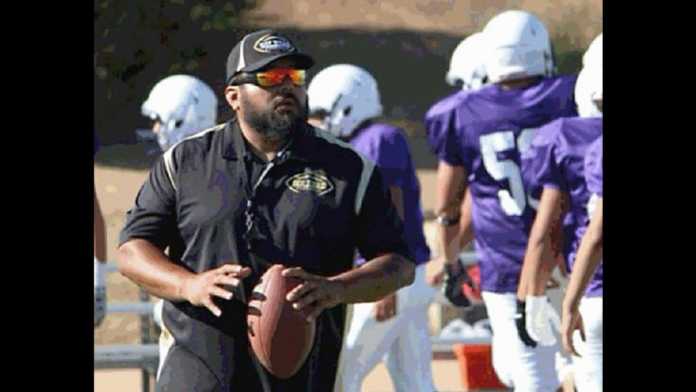 “I took a year off from coaching last year and I am ready and excited to get back out there as varsity coach,” said Rodriguez. “I started out as an assistant coach almost as soon as I got out of high school and have coached under some good coaches. My main job right now is to get a coaching staff in place as I only have like two or three guys that will be returning to coach.”

After the coaching job was advertised and candidate were interviewed Rodriguez was hired to lead the Aztecs.

The 37-year-old Rodriguez is a 1999 graduate of King City High School and played under former Mustang head coach Norm Silva. Rodriguez and has wife Esmeralda have a six-year-old and two-year-old son.

“Eric is a good choice to be head coach at Soledad,” said Silva. “He is a hard worker and doesn’t take shortcuts to get things done. I coached him at King City and he was also a member of our coaching staff. He knows how much is involved to run a football program.”

Rodriguez began coaching in Soledad in 2001 under coach Ron Militano and served as an offensive and defensive line coach. Rodriguez serves the Soledad Union School District as Maintenance and Transportation Director.

“Right now we are about a week behind as we have not had a spring ball program yet,” said Rodriguez. “I know many of the kids because I have coached them and they know I like to run a pro-style offense and it will be something they are comfortable with.”