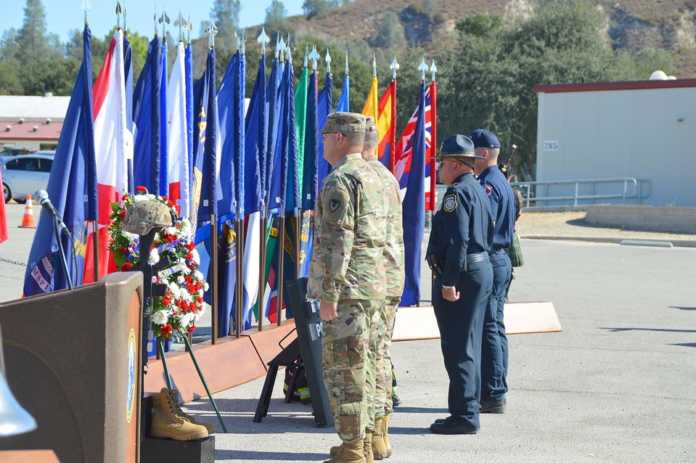 SOUTH COUNTY — Everybody remembers what they were doing on Sept. 11, 2001. Shawn Sullivan, chief of the Fort Hunter Liggett Fire Department, was an airman stationed at Hurlburt Field on the Panhandle of Florida when he learned that two commercial airliners slammed into the World Trade Center towers one and two, and then another into the Pentagon.

Sullivan was an Air Force firefighter for the base and in his mid-30s at the time.

“At first we were all thinking how a pilot could misjudge flying around the towers,” he said. “Then it kind of hit us.”

Sullivan — along with dozens of U.S. Army soldiers, base firefighters and other attendees, including civilians — reflected during a commemoration ceremony last Wednesday at Fort Hunter Liggett on the 18th anniversary of the event that changed the world forever.

The ceremony at the base was one of several across South County that day, including an observance in Greenfield and Soledad.

At Fort Hunter Liggett, the brief and solemn ceremony was held in a parking lot on the corner of Infantry and 7th Division roads on base.

Maj. Cesar Rodriguez, the base chaplain, led the invocation, which was followed by the placing of a wreath by a firefighter and police officer at the base of a row of state flags. It was placed next to a police riot shield and firefighting jacket and axe to signify the dozens of first responders who were killed in 9/11.

The shrine that included a bell was flanked by two small audiences, the Fort Hunter Liggett Fire Department behind them, and a formation of soldiers behind the firefighters. The bell was rung several times and was followed by a bugler performance conducted by Ben Hanneman, a King City native who volunteered for the event.

Col. Charles Bell, the base commander, gave a speech memorializing those who died — 2,977 total — during an attack by violent religious extremists, launching a war in Afghanistan that has persisted to this day.

Nineteen members of the extremist group al-Qaeda hijacked four planes, crashing what essentially amounted to missiles into the two World Trade Center buildings in downtown New York City and the Pentagon in Washington, D.C. The fourth plane crashed in an open field near Shanksville, Penn., killing all onboard.

“We honor and remember those that we lost, but we also recognize that the American spirit can’t be broken,” Bell said, “and we must continue to move on.”

Bell was a junior officer stationed somewhere in West Virginia when he remembers learning of the attack. He and a colleague had just finished conducting site surveys and sat down for lunch. Bell remembers a woman running up to them and — because they were in uniform — frantically expecting they were going to immediately do something.

“That’s the kind of frame of mind we were as a country,” he said.

The event became a wakeup call, according to Bell, that shifted the U.S. armed forces into a state of constant readiness. The level of patriotism felt since the event inspired a whole new volunteer Army the country has not seen since the Revolutionary War, he said.

But the conflict in Afghanistan continues, becoming the longest war the United States has ever fought. It is now a very real possibility that enlisted soldiers who were born after the 9/11 attacks could deploy to and fight in a war they were not alive for when it began.

When asked about that, Bell said it shows how foreign threats have evolved since the country was founded. Where the military has prepared fights against adversaries fighting for other governments, according to Bell, his soldiers are now training to fight against “non-state” actors, or enemies who are not allied to any country.

The attacks have also changed the way firefighters train, Sullivan said. Before, their jobs consisted mainly of putting fires out, but now Sullivan said 9/11 has modified his training to prepare for acts of terrorism — particularly the use of weapons of mass destruction like bombs and chemical or biological weapons.

In Soledad, firefighters and police officers gathered with staff and residents of the Eden Valley Care Center, which hosted its first 9/11 commemoration in the courtyard.

The event was organized by Pamela Hernandez, Eden Valley’s activity director. Hernandez, a Soledad native, remembered the day 9/11 happened. She was at home with her grandfather, who was glued to the television set. Hernandez said she remembers saying something like, “Hey, that looks real,” to which her grandfather stated: “Pumpkin, it is real.”

“That was the first time I’ve seen my grandfather cry,” Hernandez said.

Like the ceremony at Fort Hunter Liggett, it was short and sweet. Soledad Police Department Chief Eric Sills gave a speech, along with Gary Staab, interim executive director for the Soledad Community Health Care District.

Staab told the small crowd that the memorial service is a reminder of the things they should never take for granted, such as their loved ones and the first responders who perform acts of heroism on a daily basis.

Staab, who is old enough to remember the assassination of President John F. Kennedy, said the country has never experienced anything like 9/11.

“Never have we seen such a catastrophic and horrible event,” he said. “What I saw in those events was very much an attack on our style of life.”

Closing out his speech, Staab recited a quote by Kurt Vonnegut that has stuck with him for life: “I can think of no more stirring symbol of man’s humanity than a fire engine.”