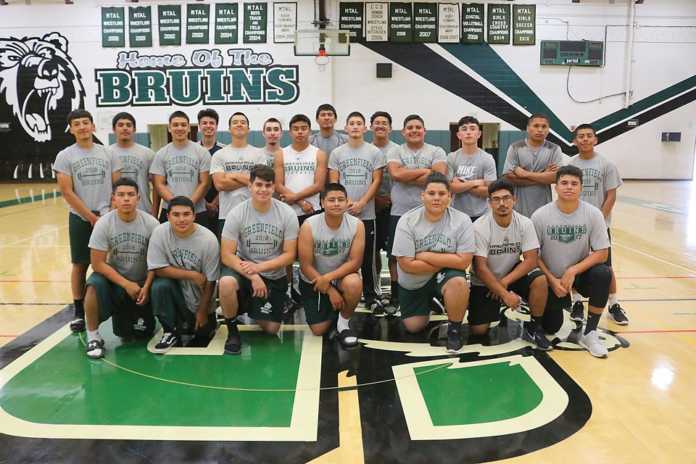 Players prep for South County Jamboree this Friday in Soledad

SOUTH COUNTY — Weeks of training will be put to the test on Friday as football teams from King City, Greenfield, Gonzales and host Soledad High suit up for the South County Jamboree.

The event will feature the varsity and junior varsity teams from their respective schools.

“We looked pretty good last Friday at our Blue and White Scrimmage and we’ll be ready to take the field in Soledad,” said King City Mustangs head coach Mac Villanueva. “Our numbers are where they should be as we have 35 players on the varsity team and about 50 on the JV team.”

The King City Mustangs will have a bye week on the weekend of Aug. 24 and 25 and will open the non-league schedule at Greenfield on Friday, Aug. 31.

Greenfield head coach Adam Barsenas welcomed about 70 players to the varsity and junior varsity teams and remarked that his team has worked hard and wants to do well before their first Pacific Coast Athletic League game on Friday, Aug. 24, when they host the Pacific Grove Breakers in a non-league game. Barsenas is in his first season as the Bruins varsity head coach.

“We will have about 16 returning players from last year’s varsity team,” said Rodriguez. “Our pre-season schedule is pretty tough because we start next week at Palma and then we play at Gilroy the following week.”

At Gonzales, Arthur Berlanga returns to coach the Spartans. Gonzales opens the non-league schedule Aug. 24 at Morro Bay and travels to Pacific Grove for a non-league game with the Breakers.

“All summer we have had many players show up to condition and lift weights,” said Berlanga. “We are ready to run our offense that we have installed and put some work in on both sides of the ball.”