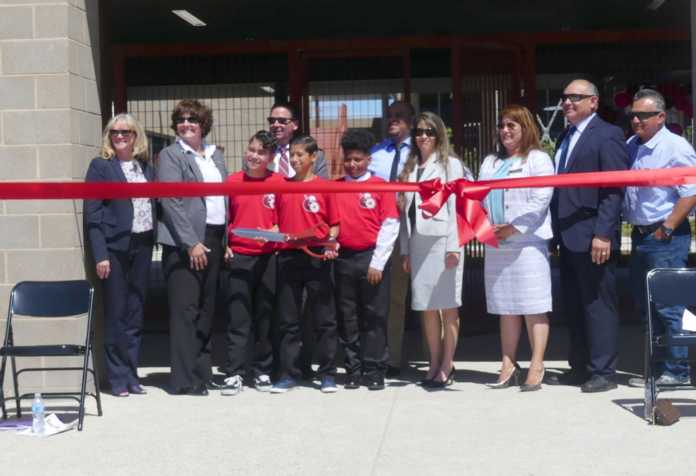 SOLEDAD — After four and a half years, Main Street Middle School recently celebrated its ribbon cutting with the Soledad community, school board, school district and students.

“Today is a historic day in Soledad, as we cut the ribbon on an absolutely gorgeous new Main Street Middle School,” Superintendent Timothy Vanoli said at the June 29 event.

Four buildings represent the fifth school to be built on the school property.

According to Vanoli, the first school at the corner of Main Street and Market was built in 1875. Main Street Middle School’s last remodel took place in 1953 and was the school that students had learned in until the upcoming school year.

“This project was funded by all of you, by Measure C, a $40 million general obligation bond approved by the voters in 2012,” Vanoli added, “and a 2018 bond reauthorization totaling approximately $55 million from both sources.”

The old campus is currently being torn down and will include site restoration, bringing play fields and irrigation. The library will be remodeled into a professional development facility, as it is the newest part of the 1953 remodel.

“What has been done to make this state-of-the-art building possible is incredible,” Principal Lois Peterson said. “We are striving for excellence.”

“I would like to express my gratitude to all the hardworking individuals who took part in the construction process of our new school,” Harrell said. “Most of all, I would like to thank those who joined us along the way in our path to fostering greater student success.”

Construction took about four and a half years, from design through construction, to get to the end result of a ribbon cutting June 29. The current buildings make up 106,000 square feet.

Representing the architects and construction management were Walter Estay from LPA Architects, John Dominguez and Erick Dilbeck from School Sites Solutions and Dilbeck and Sons. Serving as the DSA inspector was Brandon Leach, who ensured that the school passed inspection.

“This project has been, honestly, a highlight of my career,” Dominguez said. “I’ve been blessed with being a teacher, an administrator, building schools, planning schools and a lovely wife.”

Main Street Middle School represents the second largest development in Monterey County over the past five years. Over the past four years, 20 different state and federal agencies and more than 20 different trades have been involved in the construction of the school, creating over 250 jobs.