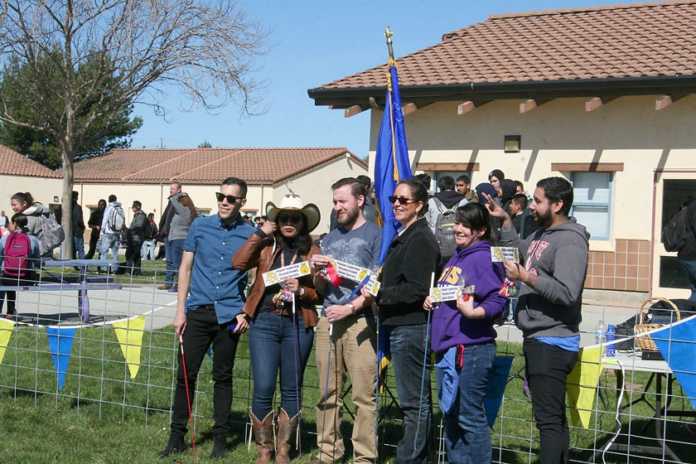 Several teachers switched places with their high school students on Friday afternoon to show market hogs. The teachers each had a pig they were given and a showmanship tool to turn the hogs around or to go a different direction. Judging the exhibitors was Principal Jeffrey James.

James said all the teachers were winners, but the top showmanship honors went to first place Melissa Armer, second place to Patrick Graham and third place to Maria Zamora.

“We had students come out, gave prizes, music and just had a lot of fun,” Jimenez said.

Naizah Hernandez has been in FFA for four years and became interested in FFA her freshman year when she was talking with a friend, who explained that FFA stood for Future Farmers of America and there were different aspects to the program.

“One thing specific I wanted to do was raise a pig,” Hernandez said. “Honestly, it’s very fun, a great experience. You get to see a piece of being an every day farmer.”

Hernandez said the experience shows how to take care of something else besides herself. Her pig’s name is Tinkerbell and she calls her Tinker. She has had five animals during her time in FFA, both hogs and lambs, and this is her second female animal.

Ricardo Hernandez is a second-year FFA member but is raising an animal for the first time.

“There’s a lot of stress because raising an animal is a lot of work,” he said. “The hardest part is definitely cleaning them. Their skin is not used to it so they become very squirm when you wash them.”