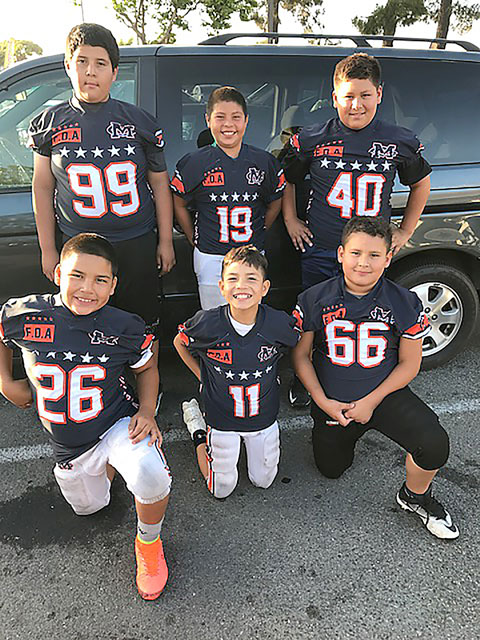 TEMECULA — The Monterey County Hit Squad ended the spring football season on Friday with games against the Arizona Bandits and the Arizona Rams. The Hit Squad featured five players from Greenfield and is a member of the American Youth Football League.

The Hit Squad lost 12-0 in their game with the Bandits and finished the tournament with a 27-7 setback against the Rams. The Hit squad team includes players from Monterey County, Santa Clara County, and the Sacramento area, and are coached by George Sadler.

“Our kids play like Ironmen in the tournament because we had some players that were unable to make it to tournament,” said Coach Sadler. “That meant that everyone had to play a lot of minutes against some good teams. The effort was there in both games by the players and that is all I can ask for. The kids from Greenfield played really well and they are great kids. We hope that they keep playing in our league because that will only help them to become better football players in high school. I feel that we are a good feeder program for all the local high schools as we prepare the kids for the next level of play.”

Next season the players from the Hit Squad will be part of the Snoop Youth Football League that was founded by rapper Snoop Dog. The league features teams throughout California that play at the regional, state, and national level with championship games at the end of the season in Florida.