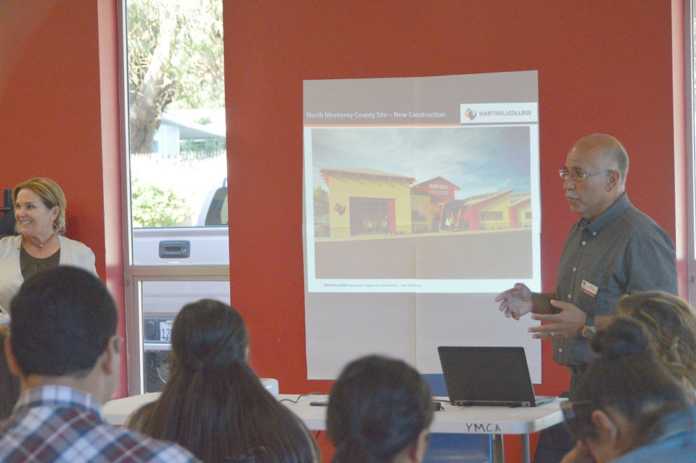 SOUTH COUNTY — Students, nonprofits, elected officials and citizens gathered in a meeting room at the South County YMCA in Soledad Aug. 22 to hash out which educational programs and services they wanted for the upcoming Hartnell Community College facilities.

They wanted a variety of things and included courses on food safety and wine studies; social services for student veterans, formerly incarcerated students and those with special needs; four-year curricula; and even courses on wastewater treatment.

The new Hartnell College facilities will be funded by the $167 million voter-approved Measure T bond, which will include a new education center in Soledad and additions to the existing campus in King City. The bond will also include a new nursing and health sciences building and a renovation of buildings on the main campus in Salinas.

Measure T, which is funded by a $19.85 additional ad valorem tax per $100,000 of assessed property value, was overwhelmingly passed by Monterey County voters by nearly 70 percent in the 2016 election. Citing the need for greater access to affordable education and job training programs for Monterey County’s Latino population, the Hartnell Community College District voted to place the measure on the ballot.

Roughly $70 million of the measure will fund five projects during phase one of construction that will include a Soledad campus, which will encompass a little less than 17,000 square feet of space located on the corner of Orchard Lane and Metz Road. Other projects include a new nursing and health sciences building and renovations to two existing buildings on the main campus in Salinas, and a new facility in Castroville.

The King City Education Center expansion will double in size, tacking on an additional 12,500 square feet, according to Joseph Reyes, Hartnell’s executive director of facilities, planning and construction management.

Earmarked funding includes $8.8 million for the Soledad campus and roughly $6 million for the King City project, although Reyes added that both amounts could increase since bidding has not started.

Reyes told South County Newspapers that bidding was delayed because the meeting with the Division of the State Architect (DSA) officials on Sept. 3 was postponed. Reyes said the DSA, which oversees design and construction for community colleges, must first approve the plans before construction to begin. A new meeting date has yet to be determined.

The DSA reviews plans for accessibility and fire safety, among other things, Reyes said.

The timeline for construction on the Soledad campus will take up to 14 months and could begin as early as November or December. Classes could begin as soon as spring or fall 2021, he said.

As far as the King City campus, Reyes said the construction timeline for the new addition is one year and could be ready by spring 2021.

In Soledad, the college received a little help from city officials when they deeded over nearly four acres of land for the new campus. According to Erica Padilla-Chavez, District 6 representative for the Hartnell Community College District and wife of Soledad Mayor Pro Tem Alejandro Chavez, this saved money that would have paid for construction and design and allowed the funds to be reinvested back into the facility.

“It’s very rare that you see land given away like that,” Padilla-Chavez said. “It’s even more rare to see two governmental institutions working in partnership to execute an outcome.”

According to Hartnell Superintendent/President Willard Lewallen, the process of getting the expanded education facilities to South County can be traced back to 2002 with the passage of Measure H, which was used to pay for the college’s new library, STEM (science, technology, engineering and mathematics) Center Building on the main campus, and other additions.

South County facilities were planned, but the measure ran out of money, Lewallen said.

“Ultimately, you have to prioritize,” he said.

Lewallen said Hartnell currently teachers courses at the local high school, such as general education courses, Spanish, and in the past has provided administration of justice courses to support jobs for the two nearby correctional facilities. The college will not be able to duplicate every program taught at the main campus, however, but it will try, he added.

“That’s what these meetings are about,” Lewallen said, “to get community input.”