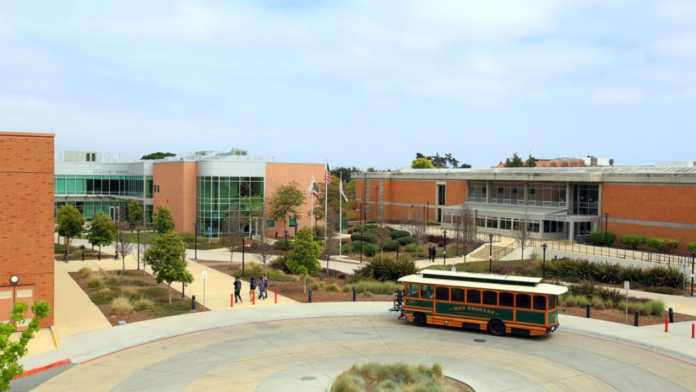 SALINAS — Hartnell College is inviting the community to a news conference and celebration tomorrow, Aug. 8, to launch the Salinas Valley Promise scholarship program, the college’s most ambitious student success program ever.

Beginning with this fall’s semester, which starts Aug. 12, the Salinas Valley Promise is providing free tuition to more than 600 first-time Hartnell students, along with a laptop computer, leadership training and mentorship, regardless of their family’s income. Full-time tuition and other program benefits will extend to a second year for participating students.

“Hartnell’s Salinas Valley Promise is a scholarship program, but it really is much more,” said Hartnell Superintendent/President Dr. Willard Lewallen, who will be the event’s opening speaker. “It is a completion program, putting students on a path to complete a transfer degree or pursue a technical career.”

The Promise program was modeled after two of Hartnell’s existing student success programs, called WELI (Women’s Education and Leadership Institute) and MILE (Men’s Institute for Leadership and Education), which serve about 25 students each year who have already started college. They receive small-group training in leadership and such life skills as budgeting and communication, as well as individual mentorship and financial support.

Unlike WELI and MILE, however, the goal with the Promise is to reach as many incoming students as possible — as many as 1,000 or more in years to come. In 2018-19, Hartnell enrolled 1,361 students from high schools in its district, not all of whom were able to attend full time.

Students in the Promise program are required to enroll in at least 12 credits — considered a full-time course load — compared to nine units per semester for WELI and MILE participants. Research has shown that students who attend full time are much more likely to stick with college and eventually graduate.

“I would like every student and every parent — and every counselor and teacher at the high school level — to know that there is a community of people here at Hartnell College who are rooting for them,” said Jackie Cruz, vice president of advancement and development and the Hartnell College Foundation.

The Salinas Valley Promise builds on the state-funded California Promise Grant, which provides free in-state tuition to income-eligible students, by extending that benefit to all first-time, full-time students in the Hartnell district. It also includes a small-group leadership institute during the weeks of July 29 and Aug. 5, quarterly workshops with fellow Promise students and regular mentoring by volunteer Salinas-area professionals.

“We want to make sure that students have the social, emotional and academic support that they need to succeed,” said Bronwyn Moreno, director of student affairs for special programs, who is leading the Salinas Valley Promise program.

Because of the need to fund students who do not qualify for the state fee waiver, the Hartnell College Foundation has invited private donors and local governments in the district to lend their financial support.

The leading public partner is the County of Monterey, whose Board of Supervisors voted April 23 to commit $200,000 to the Promise program. The cities of Gonzales, Soledad and King City are also making financial contributions.

Supervisor Lopez, who represents south Monterey County, said he believes the county’s investment can spur other public and private partners to add their support in the future.

“Too many of our young people are convinced they do not have what it takes to earn a college degree,” Lopez said. “Others lack confidence when it comes to taking their new knowledge and training into the workforce. With its financial support, leadership training and mentorship component, I am confident the Salinas Valley Promise will enable students in our communities to get past those barriers.”

Private donors who are stepping up to support the Promise program include Bud Colligan, co-founder of the Monterey Bay Economic Partnership, and his wife, Rebecca, and Margaret D’Arrigo-Martin, CEO of Margaret Inc. and vice president of community development for Taylor Farms.

D’Arrigo-Martin, who has been an active member of the Hartnell College Foundation’s Salinas Valley Promise Committee, said that the Promise is poised to help unleash the talents of the region’s young adults.

“The Salinas Valley Promise is an economic development model that supports the rich talent we have in our local students,” she said. “This program will help Hartnell build the community leaders of the future.”