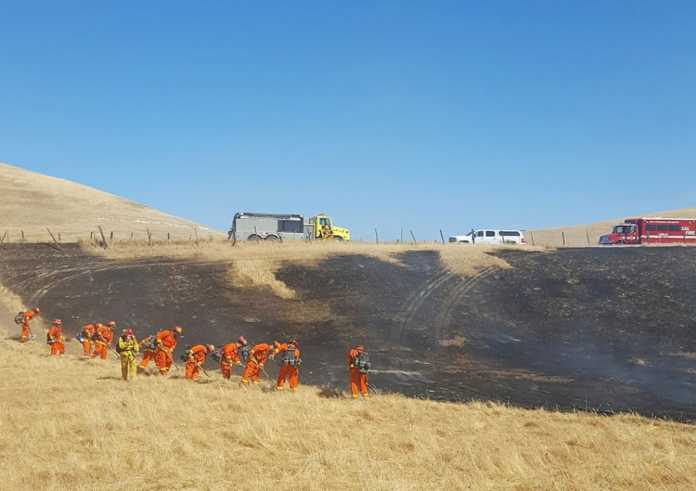 The fire broke out just before 2 p.m. on Sept. 1 near the intersection of Thorne and Los Coches roads west of Greenfield and was already 2 to 3 acres in size when Cal Fire and local fire agencies arrived on scene.

During the firefight, three Cal Fire employees suffered minor burns and were airlifted to nearby medical centers for treatment. All three have been released, officials said.

“Firefighters from all over the south Monterey County (including Greenfield) worked their tails off on this fire and did a fantastic job,” wrote Greenfield Fire Department on its Facebook page later that day. “We also want to thank AMR, Mercy Flight, and Cal Star air medical services for taking care of the firefighters.”

Three structures were threatened in the 70000 block of Jolon Road and evacuations were ordered, according to the Monterey County Sheriff’s Office. No injuries, however, were reported in that incident.

The cause of Sunday’s fires is under investigation.

“Thankfully, none of the injuries was serious,” Cal Fire said in a news release. “Nevertheless, this is an important reminder that fire season is year-round in California.”

Despite the relatively slower start to peak season, officials said, the public should maintain at least 100 feet of defensible space around structures and practice exit drills in the home. Visit ReadyForWildfire.org or fire.ca.gov for ways to prepare and prevent wildfires.