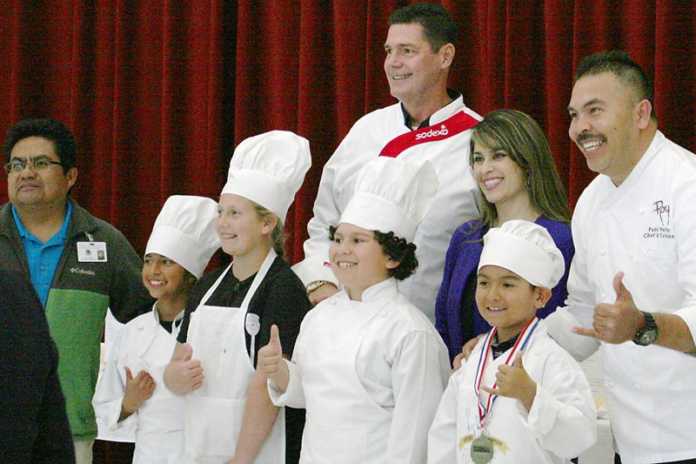 Ortega, 7, is a second-grade student at Jack Franscioni Elementary and impressed the three judges by making oven-baked salmon over corn, black beans and avocado salad.

“It’s a really quick meal that my mom makes,” Ortega said when asked why he chose salmon in his meal.

Ortega would like to cook more in the future and said it felt good to be named the winner of the cooking competition.

“When I grow up, I want to be a future chef,” Becerra said. “I really enjoy cooking.”

Becerra chose the bean salad because it is a healthy option and he received encouragement from his mom. He had a lot of fun participating in the competition and said he would be willing to be part of it again.

The Future Chef competition is a national event for school services and this year selected the theme of “Fiesta Fit-Healthy Mexican Food.” During the competition, the four aspiring chefs prepared two plates of food, one to display and one for the judges to taste as well as a little extra for the hungry audience members.

“The future chef event has been something we’ve been doing for almost 20 years,” said Sodexo Area Operations Manager Scott Hoyle. “Originally it was designed because there seemed to be this absence of teaching our young people how to prepare healthy meals.”

The effort was made to move dinner back to the dinner table to share a meal and move away from the fast-food world.

All four chefs received cooking tools to help them continue their cooking journey.