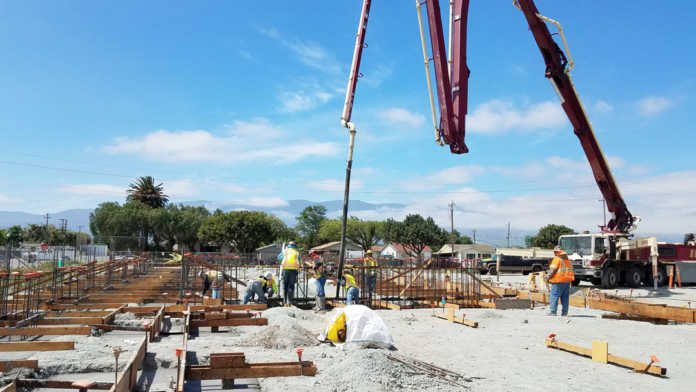 SOLEDAD — For months many thought the project would never start. But, as many have noticed as they walk and drive down Main Street in Soledad, big changes are coming.

Last week the Soledad Unified School District (SUSD) held a small ceremony at Main Street Middle School (MSMS). Placing of the cornerstone was held last Monday with members of the School Board on hand to get the construction of Phase Two started.

The baseball fields and grass were long gone at Main Street Middle School, 441 Main St., but just when locals expected building to start on the site, and Phase One was underway, everything stopped.

Phase One was cleaning and grading the lot, the placing of the plumbing, electrical and other support systems in ground for the four future two-story buildings that will house the teachers and students of MSMS, giving them a new and updated learning experience.

Once Phase One of the build was complete, everything stopped and the trucks and equipment went away. The only change to the site was when a sprinkler system was put up on the site to keep the dust down and the site intact.

The Division of the State Architect (DSA), which provides design and construction oversight for K-12 schools, community colleges and various other state-owned and leased facilities, caused the delay between phases.

They check for earthquake protection, for accessibility and other factors for the buildings.

It took the DSA months to approve the plans, but they finally accepted the architectural designs to build the new MSMS. This meant that Phase Two could proceed.

Phase Two includes pouring the concrete footing and placing the rebar to support the new building.

Currently the school has roughly 750 seventh- and eighth-grade students. The new school will have room to house up to 1,500 students and will allow the sixth-grade students to move back to the middle school.

Sixth-, seventh- and eighth-grade students were once together at MSMS, but as the population rose in the City of Soledad, so did the amount of students. This caused the sixth-graders to move back to the elementary schools in the city.

The new school is slotted to have its first students within its rooms in fall 2018.

The classes will move in phases, as the new building is occupied the old school will be demolished.

They are presently constructing Buildings A, B and D. Building C will be built later in the future.