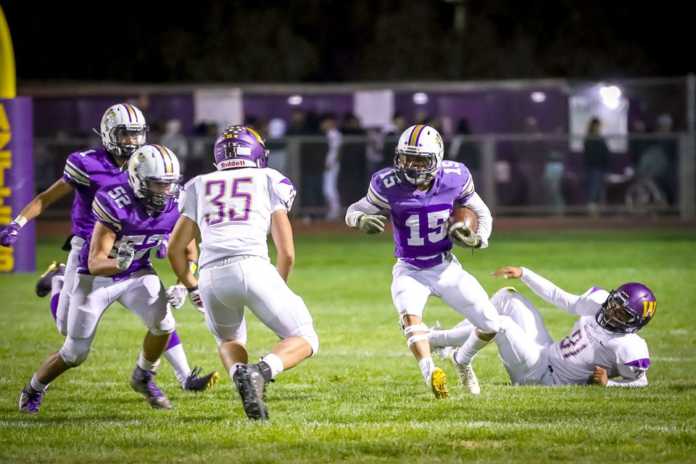 Photo by Arnold Bernal
Angel Olivas (#15) of the Soledad Aztec football tries to get way from the Righetti Warrior defense. Olivas scored a touchdown in the second half for Soledad.

SOLEDAD — The 4-1 Righetti High School Warriors scored six touchdowns to drop the host Soledad Aztec football to 0-4 in non-league games. Despite the long drive from Santa Maria, Warrior running back Adan Solis was unstoppable as he scored three touchdowns as the visitors went up 35-0 at halftime.

Soledad played the game with many starters out with injuries and fought back with two scores in the third quarter to avoid being shutout for the second week in a row.

“Righetti mostly ran the ball although they did have a few deep pass on us,” said Soledad head coach Eric Rodriguez. “The team played a lot better in the second half even though by that time we were playing against the second team for Righetti. They had some good size on them and that wore us down at the start of the game. Offensively I felt that Angel Olivas had a good game, along with Gabriel Florez at quarterback. Victor Ocampo had another good defensive game and led us in tackles.”

In the second half Olivas scored on a 41-yard pass play from Florez and David Madrigal scored on a 38-yard touchdown pass from Florez. Olivas finished with six receptions for 112 yards and one touchdown and Flores was completed 12 passes for 143 yards. Chris Gonzalez led the Soledad rushers with 38 yards. The Warriors had 156 rushing yards and quarterback Logan Mortenson passed for 185 yards on a nine of 15 passing performance.

In the junior varsity contest the visiting Warriors downed the Aztecs, 37-8.

“Our preseason schedule came to a close with Righetti winning, 37-8,” said Soledad JV head coach Jose Escarcega. “The JV Aztecs came out and played their hearts out and that is all the coaching staff and I can ask for. We’re proud of these young men. Arnold Bernal scored a touchdown in the third quarter and Daniel Valdez scored on the two-point conversion.”