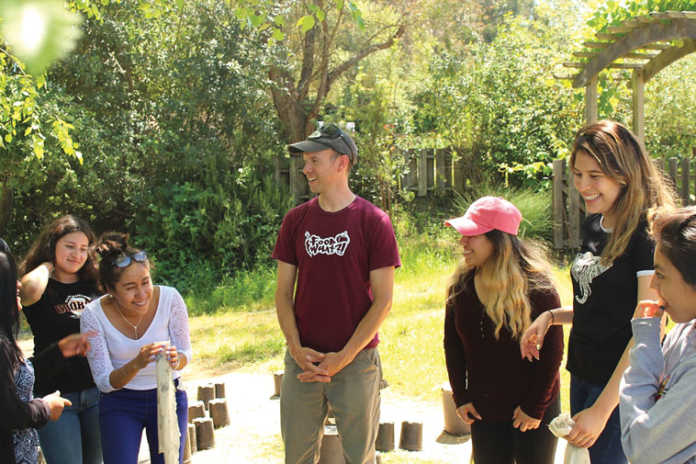 WATSONVILLE — Three years ago, 18-year-old Cesar Mendoza walked into the El Pajaro CDC Kitchen Incubator with a group of his peers. They were there for a workshop to make vitamin water and to learn how the kitchen ran.

He is now the assistant manager.

Mendoza had been a participant in Food, What?!, an organization that brings the youth of Santa Cruz County into the world of farming, food production and cooking.

Mendoza explained how he walked up to the kitchen’s manager before the day was done and offered to work.

“I’m usually kind of shy, but I saw an opportunity and had to take it,” Mendoza said. “But I don’t think I would have if it hadn’t been for Food What.”

Food, What?! was founded in 2007, and over the past decade, it has expanded in both size and impact. The first year saw around five participants. This year, more than 60 youth were involved in core programs, with another 1,000 served through other events and community partnerships.

The nonprofit organization prioritizes youth from low income families, those in foster care or who struggle with problems such as academic challenges, trauma and substance abuse. Teens participating can earn school credit and a paycheck to help support their families.

The staff at Food, What?! aim to help the teens by impacting them in three ways: health, job training and personal growth.

“There is real power in getting your hands dirty, down in the soil,” said Doron Comerchero, founder and executive director. “Seeing these kids getting to know who they are and becoming healthy — physically, mentally and emotionally — is something else.”

Comerchero had seen similar organizations to Food, What?! popping up across the country, and came to Santa Cruz County seeking to develop skills to start one. After taking on an internship at the UCSC Farm and Garden and working on a commercial farm, the idea for Food, What?! was formed.

For the first few years Food, What?!’s headquarters were at the UCSC Farm. Eventually, the staff noticed that a good deal of participants were from the Watsonville area.

“It seemed wrong that those who needed the program the most had to commute the farthest,” Comerchero said.

The staff at Food, What?! then teamed up with Thomas Broz, president of the Santa Cruz County Farm Bureau and owner of Live Earth Farms in Watsonville.

For the past five years, programs have been held both at UCSC and Live Earth Farms.

“It’s really helped us bridge North and South County,” said Program Manager Irene O’Connell. “The kids build connections, meeting people they might not have otherwise and seeing things from a different perspective.”

Food, What?!’s programs are distinguished by season: Spring Internships, Summer Job Training, Fall Project Management and Winter Community Education. If a youth completes all four, they have the option to become a Junior Staff Member the year following.

O’Connell explained how many teens in the area are only exposed to one side of the agriculture industry.

“Many have family members working in the fields,” she said. “We want them to know there are other options. They can maybe see a different life for themselves.”

As an alumni and former Junior Staff Member, Mendoza explained how much his eating habits changed because of the program.

“I stopped eating fast food,” he said. “I actually like eating healthy now and choose organics whenever I can.”

“We always ask the youth, ‘What about food interests you?'” Comerchero said. “They all have different answers — whether it’s nutrition, or the farming, or the business end of things.”

Both Comerchero and O’Connell emphasized the importance of being informed by the students themselves, of listening to what they had to say.

“This is a positive, non-judgmental space to come together outside of school,” O’Connell said. “The teens have the opportunity to give us their own ideas and make positive accomplishments.”

Food, What?! is celebrating 10 years in 2017. Comerchero, who was recently a recipient of the Tony Hill Award and spoke at the Martin Luther King Jr. Convocation, is eagerly looking ahead.

“It’s been an incredible journey,” he said. “I’m humbled at how receptive and supportive the community has been. I’m excited to see what comes next.”

For information on Food, What?!’s programs, events and how you can help support the organization, visit foodwhat.org.