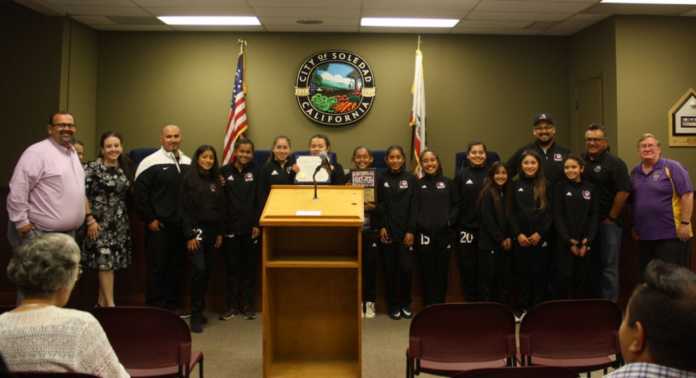 Photo by Samantha Bengtson
South County FC Aztecs gather with the Soledad City Council, which recognized the athletes during its July meeting.

SOLEDAD — South County’s first-ever traveling soccer team was honored by the City of Soledad on July 11 during its regular council meeting.

According to Coach Jose Tejeda, the Soledad female traveling soccer team, named South County FC Aztecs, began with a group of 11 when they were under 10 years old. The program has expanded to at least five teams and is growing, with players up to 16 years old. The team is also coached by Jose Aguilar.

Tejeda said the team was lucky this year because of the commitment of the players and the parents.

South County FC Aztecs received the award of undefeated champions and presented a plaque to the Soledad City Council for its support, thanking the members for letting the soccer players use Vosti Park.

The City Council presented a certificate to the soccer players as well.