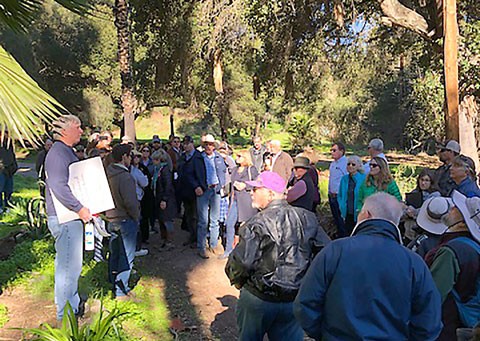 All nine commissioners were present, along with staff from Cal Fire, the Monterey County Planning Department and various other departments. Thompson Holdings, LLC, from Philadelphia, Pa., was represented by John Thompson, the developer of the property. This field trip was open to the public and was attended by about 83 individuals.

The meeting started with an introduction to the project and then an overview by Thompson. Afterward, a walking tour was made around the property. The project has been ongoing for just over 15 years. The work on the project was abruptly stopped and then “red tagged” when it was discovered buildings that had historical significance were demolished without the appropriate permits.

Hearings have been held by the Monterey Historical Society and a compromise was struck with the requirement that the buildings be replaced in the style of the era and an informational presentation and museum be maintained on site. The project now needs to have its Environmental Impact Report reviewed.

According to the report originally filed in 2005, the spa/resort will consist of a total of 103 hotel units, 60 two- to three-bedroom timeshare units and 17 timeshare villas, in addition to a number of resort amenities, such as meeting rooms, a visitors center, three restaurants, gardens, a wine pavilion, an indoor/outdoor fitness center and an outdoor amphitheater. A conference center and teaching facilities are also planned for the site.

Landscaping plans call for the removal or relocation of more than 175 native oak trees, and the non-native palms’ future are in question and do not appear on the “new” plans. It appears that there will be significant grading on the existing site as well.

Thompson has expressed the desire for this to become a “World Class Resort.” The 13-year-old plans were originally created by Hill Glazier Architects of Palo Alto and Civil Engineering done by CH2M Hill from Oakland. Both companies have done international projects.

The general theme of the project is to create a “holistic retreat center that would feature wellness and organically produced wines and gardens” that would serve the resort’s conferences and restaurant clientele. Provisions have been made for day-use activities.

Local citizens can attend county meetings to make sure the planning commission and various county offices are aware of their priorities and concerns. During the walking tour, various comments were made as to the increased traffic on Paraiso Springs and Arroyo Seco roads. In addition, questions about staff, construction and if local vendors would be engaged were noted.

The project can be found online at www.co.monterey.ca.us under the search of “Paraiso Springs Resort.” Anyone with questions can contact Mike Novo, project planner, at 831-755-5176 at the planning department.

The project approval will appear on next month’s calendar, and most likely be heard Feb. 13.