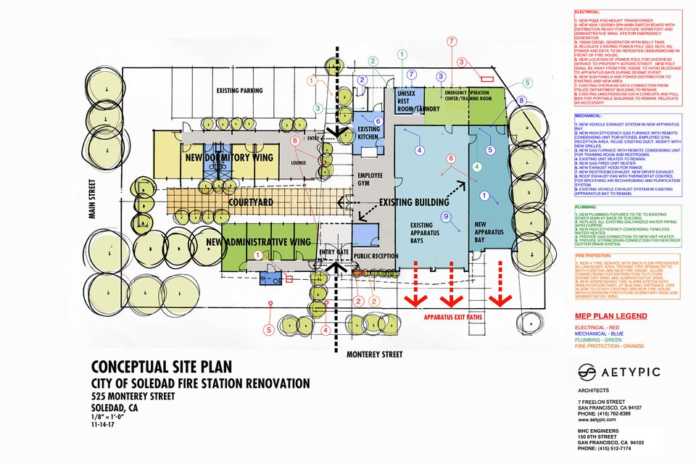 SOLEDAD — The City of Soledad is looking into expanding its fire station and is applying for Community Development Block Grants to fund the project.

The City Council began the process toward the Fire Station Expansion and Rehabilitation project back in October 2017, when it hired MNS Engineers to provide grant writing and conceptual design services.

The contract had a goal of including preliminary design services in order to define and refine the project scope and cost estimates for the renovation and rehabilitation of the fire station.

Due to regulations regarding earthquakes, a prior evaluation involving a seismic assessment was completed by Mesiti-Miller Engineering that was finished in September.

“The Seismic Evaluation Assessment was conducted to determine the estimate damageability performance for a particular building type at the fire station property based on a seismic event,” Public Works Director Donald Wilcox said. “The Assessment identified potential seismic deficiencies in the fire station structure and provided recommendations to upgrade the structure with corresponding cost estimates.”

Wilcox and city staff found a funding source in the Community Development Block Grant (CDBG) administered by the California Department of Housing and Community Development (CalHCD), which offers grants up to $3 million toward public facilities, public improvements, planning technical assistance and others.

The cost breakdown of the project would be $209,302 for general administration costs, with the remaining amount of the $3 million going toward the fire station rehabilitation and renovation.

Applying for the grant would also meet one of the national objectives to address needs of low- and moderate-income residents.

According to Wilcox, the City would know whether it receives the grant by May 26. A public hearing was held for the item Feb. 20.