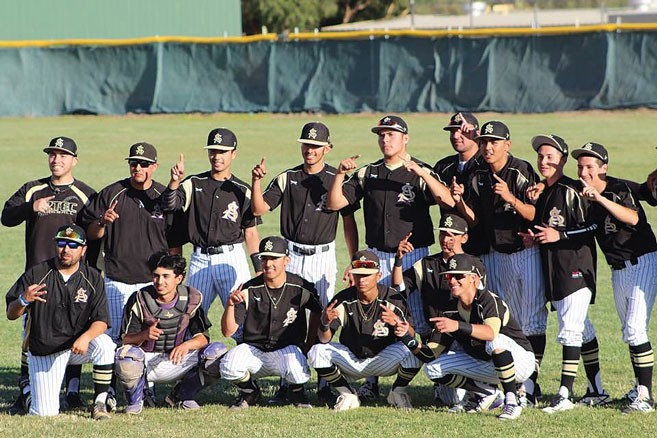 Photo by Domi Alvarez
The Soledad High Aztec baseball team won the Mission Trail Athletic League championship and finished with a 16-2 regular season record and overall record of 21-5. Soledad earned the CCS Division II number one seed and will host Prospect High School today in the opening round of the playoffs.

SOLEDAD — The Soledad High Aztec baseball team left no doubt who was the champion in the Mission Trail Athletic League as they won the league title with a 16-2 record. Soledad dominated the league this year and finished with a flurry, scoring a total 40 runs in their last eight games.

After winning co-championships in the 2009-2010 and 2014-2015 seasons the Aztecs are outright champions in the MTAL and will be the last league champion as Soledad will now be part of the Pacific Coast Athletic League.

Soledad played a home and away series with defending champion Pacific Grove and swept the Breakers 21-5 and 3-2. At home on Tuesday, May 8 the Aztecs scored 21 runs on 11 hits as five players finished with multiple hits.

The following day the Aztecs traveled to King City to resume a game that had been called because of darkness in March with the score tied at 2-2. The Mustangs won the contest by a 3-2 score in the ninth inning. King City and Gonzales were the only two teams to beat Soledad in league play.

Soledad earned the #1 seed at last Saturday’s Central Coast Section Division II seeding meeting and will host #16 seed Prospect today on the Aztec playing fields. The Aztecs finished the year with a 21-5 overall record and Prospect finished with a 14-13 record. Soledad head coach Damien Ryan guided the Aztecs to championship with the help of assistant coaches Savino Martinez, Robert Ramirez, and Diego Garcia.

Holguin led the team with pitching wins with seven wins. Pajas and Lopez led the Soledad hit parade with Pajas leading the team with 31 hits and seven doubles and Lopez had 30 hits and was credited with 28 runs batted in.