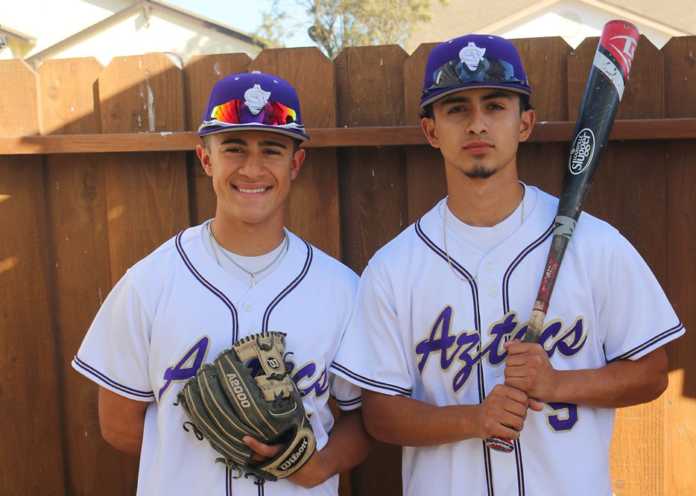 Photo by Michael Ramirez
The duo of Andru Holguin (left) and Isaac Lopez formed a solid battery for the Soledad High Aztec baseball team, leading the team to an MTAL title and the Central Coast Section finals. Holguin was selected as the league Pitcher of the Year and Lopez was the league Most Valuable Player.

SOLEDAD — Mission Trail Athletic League baseball champion Soledad High earned the top individual awards for the league with the Most Valuable Player in Isaac Lopez and the Pitcher of the Year with Andru Holguin. Aztec head coach Damian Ryan also was voted as the Coach of the Year in the MTAL after guiding Soledad to the league title.

The 18-year-old Lopez is the son of Alejandra Ortiz and Ignacio Lopez and is a two-time All-MTAL player. The 16-year-old Holguin is the son of James and Karen Holguin and made the All-League team for the first time.

Lopez had an exceptional season with a .543 batting average, 44 hits, 38 runs batted in and scored 36 runs. The senior catcher had a slugging percentage of .740 and had an on-base percentage of .583. Lopez will be attending Hartnell College in the fall and has many good memories of baseball and attending school at Soledad High.”

“One of my favorite games was when we walked on the walk-off hit by Aaron Rodriguez against Saratoga,” said Lopez. “Winning league was great, especially when we hit the ball so well to finish the season. In my classes at school I enjoyed Mr. Bourke’s class and my economics class.”

Holguin has been on the varsity baseball team for three years and played a few years of travel ball and Little League with teammates JoJo Calderon and Ben Pajas.

Holguin finished the year with an 11-1 pitching record and was 8-0 in the MTAL. Holguin pitched 73.2 innings with an earned run average of 1.81 and 60 strikeouts.

“Issac Lopez is a good catcher and calls a good game,” said Holguin. “We did well this season because we are always working to stay in shape for baseball and many of us have played together in the off season.”

Joining Lopez and Holguin on the first-team for Soledad were Ben Pajas, Christopher Villarreal, and Aaron Rodriguez.