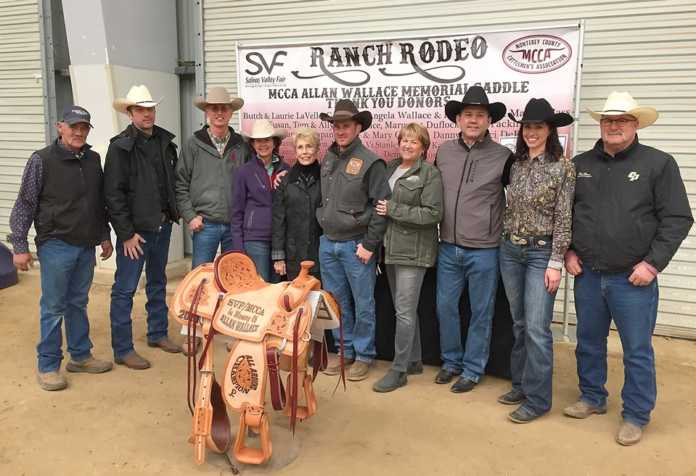 One Ranch Rodeo tradition is to recognize a local cattleman in memoriam at the event.

This year’s event was dedicated in memory of Allan Wallace, known locally for being the ranch manager at Topo Ranch in King City for nearly 30 years. The top prize was named in his honor, and many of Wallace’s family and friends were on hand Jan. 13 to celebrate him during a brief ceremony.

Through the support of local businesses and individuals, buckles were awarded to the following first-place winners of each event:

Elsa Sabin won the Kids Stick Horse Race for those 4 to 6 years old, while Brycen Escobar captured the buckle for the Kids Boot Race. In the hotly contested Dummy Roping for youth ages 5 to 10, Royce Brown came out on top.

New this year was the Salinas Valley Fair Junior Fairboard Ribbon Roping challenge. Mario Sanchez of King City won the event with an eight-second run to take home the prize.

“Salinas Valley Fair and Monterey County Cattlemen’s Association is especially thankful for all the cattlemen and cattlewomen that volunteered to put on the event, the Salinas Valley Fair Junior Fairboard crew and the donation of cattle from David Wood of Wood’s Livestock and the Topo Ranch,” said Fair CEO TJ Plew.