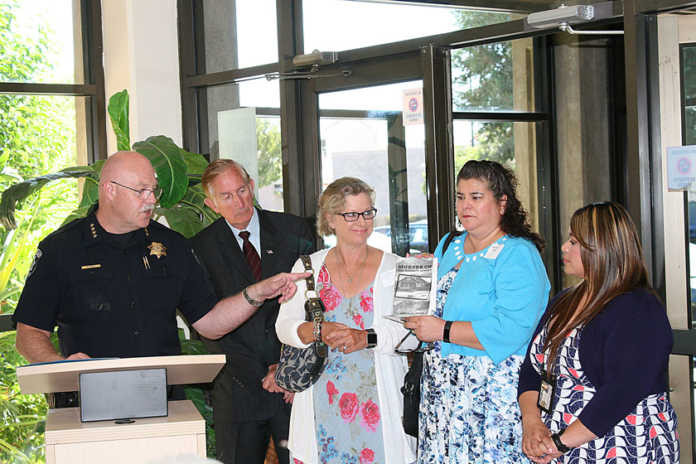 A place for healing

SOUTH COUNTY — They were hard to miss, and even harder to swallow once viewed from up close. Red silhouettes representing murder victims from South County — each with their life-ending story attached to a plaque — lined the wall outside the entryway at the former county courthouse in King City.

The wooden figures were eerie reminders of the crimes that have taken place here in the community and the importance of having a local victim center — a point that was heavily stressed last Thursday during the grand reopening of Monterey County District Attorney’s South County Victim Services Office.

Located in the newly refurbished courthouse building at 250 Franciscan Way, the victim center increases accessibility for South County residents who lost services in 2008 when the Monterey County Courts King City Division closed due to financial reasons.

“It’s a long time coming,” said Pamela Patterson, victim assistance program manager for the District Attorney’s Office. “I keep getting emotional because we started from nothing here. It really was abandoned. … We put in a lot of time and energy to be able to welcome our clients and put them at ease when they come in here.”

The victim center — open to the public Monday through Friday, from 8 a.m. to 5 p.m. — focuses on trauma-informed services and treatment for children and youth victims of crime. The office is fully staffed with a victim assistance advocate, two therapists, a legal advocate and a legal secretary, all of whom speak Spanish as well.

A variety of victim services, in-house therapy and assistance with legal advocacy also will be available through a partnership with the YWCA of Monterey County and the Monterey County Rape Crisis Center.

“We actually have in-house therapy,” Patterson said, comparing the new center to the Salinas office, where “we refer clients out for therapy.”

Additionally, the King City office will include the Truancy Abatement Program, which is available to all schools located in South County for mediation hearings.

“Not only are we primarily bringing services to child victims and youth down here in South County, we also are going to have part of our facility here that will be available for truancy,” said District Attorney Dean Flippo.

According to Flippo, the Monterey County District Attorney’s Office has the largest truancy unit in the state of California, with staff dedicated to working with at-risk youth. The goal is to ensure that all students receive an education so they can develop into responsible and productive adults.

“If we can keep them in school, we have a better chance of helping that child or student succeed once they get out,” Flippo said.

The district attorney and his staff hosted an open house July 27 for the new victim center, which is fully funded through grants. Representatives from the four South County cities of King City, Greenfield, Soledad and Gonzales and their police departments as well as the Monterey County Sheriff’s Office attended the event.

The event also featured a dedication ceremony for a new bench that honors the memory of Rodger “Anthony” Esquivel and his wife Deborah Mills. Esquivel was murdered in King City in 2012, and Mills, a former reporter for South County Newspapers, died of brain cancer in 2016.

“This day is so important for so many reasons,” Jensen said. “They would be so proud that all of you have taken the time out of your day to show up and acknowledge this wonderful service to our community. I know the D.A.’s Office and Pam and her staff were a huge part of Deborah’s healing process.”

The bench, built by students from Rancho Cielo, currently sits inside the center’s entryway. Donations are being sought to create a memorial garden outside the building, where the bench would then be relocated.

Esquivel’s sister Angelique Esquivel Murray was overcome with emotion at the dedication.

“I don’t know what to say,” she said, pausing briefly. “I think if my brother had survived his ordeal, I believe he and Deborah would have been involved in this, continuing the fight that they were very passionate about. I hope this building will bring a lot of good and stability to King City.”

Copies of Mills’ book, “Murder on 520 Bassett Street,” which shares her journey to find peace and justice for her husband, will be offered at the victim center to families who have experienced homicide. Her artwork is also on display inside the lobby.