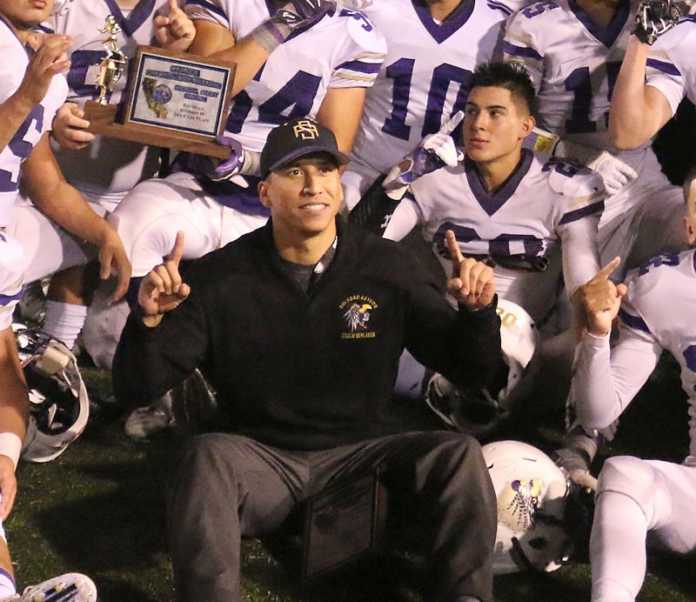 Photo by Michael Ramirez
Frankie Berlanga made history at Soledad High School by leading the Aztecs to the Central Coast Section Championship in 2016. He resigned as a football coach and teacher last Friday.

SOLEDAD — While winning football games were enjoyable for Soledad head football coach Frankie Berlanga, helping young men develop their character and become good leaders has been what he has enjoyed most as a coach and teacher.

Berlanga, the four-time Mission Trail Athletic League Coach of the Year who led the Aztecs to two MTAL titles and a Central Coast Section Championship in 2016, resigned last Friday as the Soledad head coach.

“Coaching at the high school that I graduated from, in the town where I grew up gave me instant credibility with the players here in Soledad,” said Berlanga. “I have done everything that these young men strive do as athletes and they believe they can also earn a degree if they want it. When the kids can relate to you as a person they start to believe that they can also accomplish what they want in life. To see players like Aaron Rodriguez, Robbie Santa Anna, Angel Olivas, and Emanuel Ortega become the players that they became through hard work has been very fulfilling as a person and as a coach. Those players and so many others developed not only as athletes but as leaders.”

When asked about some of his enjoyable moments at Soledad High Berlanga did not talk about wins or championships but instead spoke at length about the summer weekend camps at Hume Lake in the Sequoia National Park that helped mold the Aztec football teams.

“Our yearly camps at Hume Lake made the difference in our player’s development as a team,” said Berlanga. “The camp was not a football camp but a place where we as coaches and players were able to talk around a camp fire about our triumphs and setbacks and where we can learn to trust in each other. The camp was super isolated and the kids didn’t have cell phone reception so the players had to learn to communicate with each other. This year’s my brother Arthur’s team in Gonzales will be going for the first time and I guarantee that they will become a better team because of it.”

As head coach at Soledad, Berlanga and his staff had a record of 48 wins in their seven years together. The Aztecs won the Mission Trail Athletic League title in 2015 and 2017 seasons and the CCS Division IV championship in the 2016 season when they established a school record with a 10-3 record.

Berlanga’s resignation will have Soledad High Athletic Director moving quickly to post the football position in-house and then probably outside of the area. Berlanga will also be leaving the school as a health teacher.

“Frankie (Berlanga) resigned as a coach and a teacher, so at this point I will get things moving to find a football coach with just over a month left before spring football begins,” said Vasquez. “As a teacher the district will accept his resignation and then work to fill his teaching spot. It was nice to have had someone that was raised locally and that had a good sense of the community here in Soledad. That will be hard to replace. It is a good atmosphere here at the high school and we will do the best we can to keep things going in the right direction.”